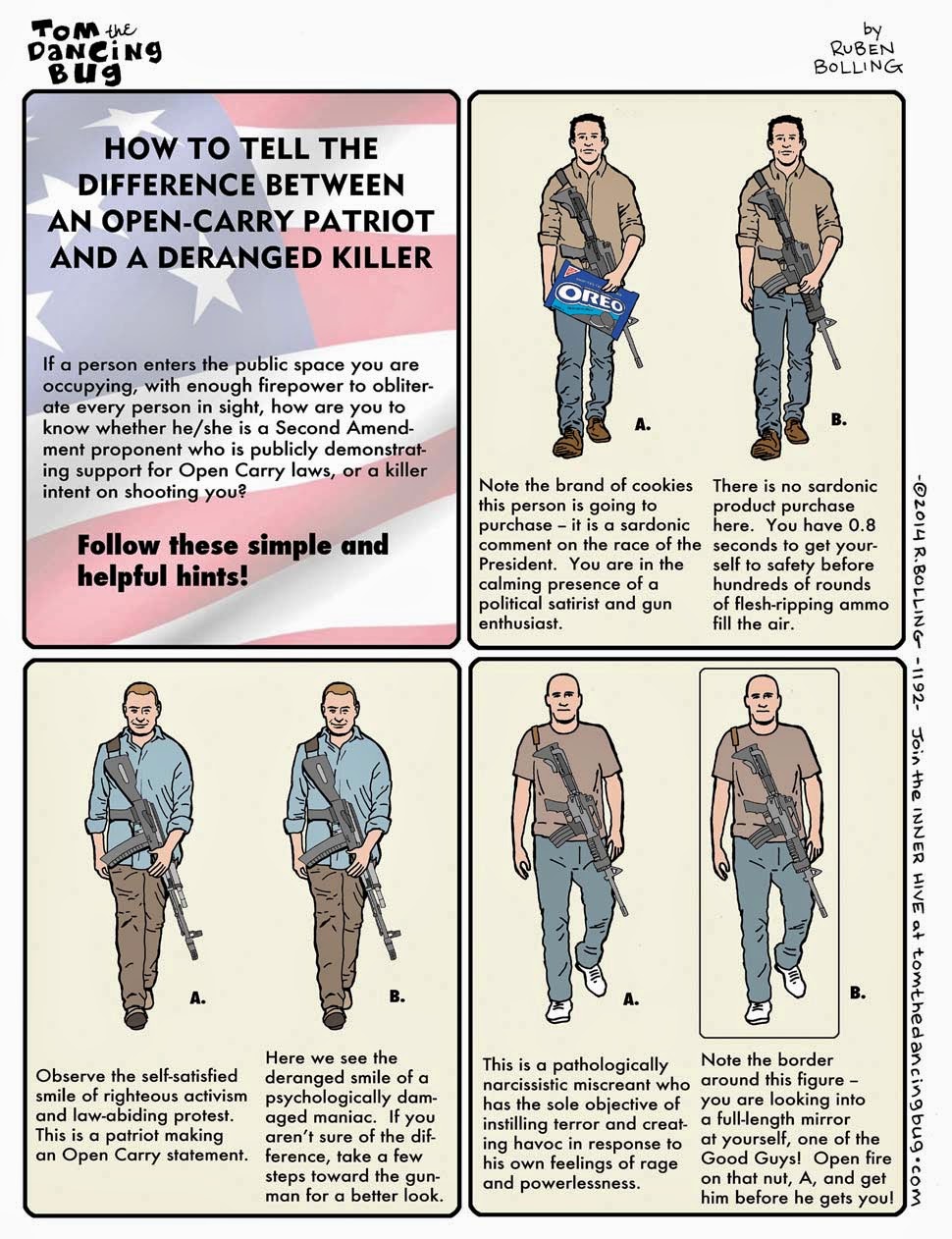 
That is one of my favourite and sadly true lines from De La Soul. It was mean to talk about the state of things growing up in the ghetto, but with all the relaxed gun laws in this country, it pretty much applies anywhere now. We’re averaging about 4 mass shootings a month in the last 18 months. The last few were particularly troubling. There were some school shootings, a Nice Guy™ on a rampage, and a couple of anti-government nuts in Las Vegas.


There were “open carry” demonstrations Texas in the last few weeks, where people with open carry licenses would walk into public places brandishing their firearms. They’re just showing off their 2nd Amendment rights, they say. They don’t really care if they’re scaring the hell out of children and parents in Chipotle, Sonic, etc. Oddly, they haven’t done any banking with their weapons strapped to them. The plus side with the open carry demonstrations, you at least know who in the room has the smallest penis.


There is a way to end this craziness. We can cut down the school shootings. We will not have to worry about assault rifles flopping around while we order burritos. You all know what must be done, but no one is willing to admit it. Ladies and gentlemen and all in between: We need to stop letting white people have assault rifles.


This will not reduce the violence in urban centers and the inner city, but we already know that no one cares about stopping that! Why else would there be such a wide cut in education in the nations? Food and health assistance have been cut, drug law enforcement has been all about punishment and not rehabilitation, social programs that got kids off the street and into rec centers and learning new things have been cut, there’s been a version of Stop & Frisk around since 1865...we get it! You don’t care about brown people! We got the hint when you called it Amber Alert, and not Lakeisha Lookout, or Where’s Juan. Besides, back when the NRA supported gun control, the States pretty much made it nearly impossible for brown people to legally have handguns and assault rifles, since everyone was afraid of brown people having handguns and assault rifles.


By not selling guns to white people, we can be safeguarded from having to see horrors like Newtown and Las Vegas and Isla Vista on the news again. We can still stay blissfully ignorant of our cities’ Garden of Earthly Delights with more drugs and guns and violence depicted. We can pretend that all the violence in the inner city is completely the residents’ own faults and that of poor public policy and the residual effects of institutionalised subjugation of various ethnicities for various reasons. Best of all, all that paranoid jingoistic talk of Obama taking all your guns will actually be true! So overall, you get to go to the movies or malls or schools without having to worry about getting shot, you don’t have to see penis with small penises in Target or Chipotle, you can blame the President for things out of his control, and you can still treat people from the inner city like they’re Morlocks! Don’t worry. We’re used to it. This is America, after all!


I don’t have any issues with people owning guns. People hunt for food all the time, and after watching Food Inc., A freshly shot turkey sounds a lot better than a Butterball. An assault rifle only has one purpose: to kill people. That is why it was made. I have even shot an assault rifle at a target...not IN a Target. It was fun, but really, if keeping assault rifles out of non-SWAT -military hands means I don't get to shoot one again, then fuck it. I'm secure enough in the size of my penis that I don't feel the need to carry one around in a Pinkberry. People ranting about the government trying to curtail their Second Amendment rights with strict regulations seem to forget that the first three words if the Amendment is, "A well regulated". It's as if they are cherry picking the Constitution, like the way bigots try to justify their hatred by picking out just a few lines in the Bib-...ohhhhh...


My points still stands. Stop giving white people assault guns. I swear, if we took the same approach to gun control that we did to fire prevention, every child would be equipped with a flame thrower by the age of five.
Posted by Chris Thompson at 07:08