You what I LOVED when I was a kid? The Brown Hornet on the Fat Albert cartoon. You know what I HATE? Serial rapists who never saw justice and will not address allegations brought against him. Now imagine my conundrum: the creator of my favourite cartoon calendar is a possible multiple sex offender. Thus far, 15 people have come forward, claiming that Bill Cosby assaulted him. These are not new allegations. In 1997, Shawn Upshaw came forward as Cosby’s mistress back in the 1970s. She claimed that her daughter is his illegitimate Puddin’ Pop®. That was all settled out of court with a $100,000 worth of hush money.  In 1984, he said privately that he needed to stop his womanizing in advance of “The Cosby Show”. In 2005, Andrea Constand filed a suit against Bill Cosby, claiming that she was drugged and assaulted by America’s Dad. Another woman, Tamara Green came forward with the a similar allegation, but this happened back in the 1970s, nearly identical modus operandi. Then TWELVE MORE WOMEN CAME FORWARD as anonymous material witnesses for the Constand case. The Constand case was settled out of court 2006, and a few of the anonymous women were outed and interviewed.

Then everything died down, and everyone forgot, until in the middle of October 2014, when Hannibel Buress pointed out in a stand-up routine the hypocrisy of Bill Cosby telling black people to pull their pants up and act respectable when he raped 14 women. That is not a respectable thing to do at all. Now we are in the middle of what most meteorologists would categorise as a Class 5 shitstorm. Let’s call it Blizzurricane Cos™. 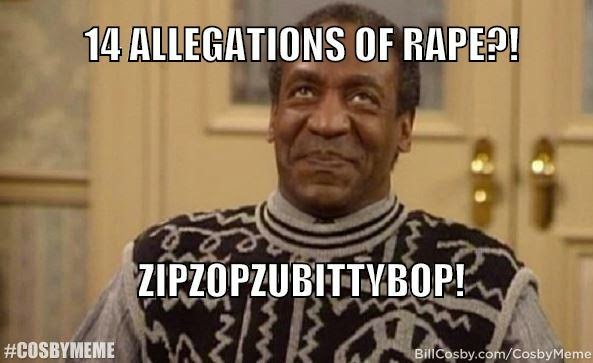 Blizzurricane Cos™ swept the nation. We’re still in the middle of it! It dumped 6 feet of drama all over parts of the internet, clogging routers and stopping traffic (Too soon, Buffalo?). Blogs were lit up for weeks! Cos aggravated the storm by going on interviews and not addressing the allegations! In a pathetic PR attempt, Blizzuricane Cos™ thought it would be a good idea to tell people to post #CosbyMemes, because apparently he didn’t learn from #AskRKelly and #AskThicke campaigns.

Look, If you are a sexual predator or sing about sexual assault while ripping off a beloved R&B legend, then you were asking for it. You put it out there like that, you can't get upset. You are responsible for whatever those Twitterers gave to you...so fitting…

Well, Blizzurricane Cos™ has reached the most dreaded level: black people claiming he was set up and “they” are trying to cut successful black men down. I hate this level, because there was a time when successful black men WERE actually being cut down by the “they”, and this is NOT it, and people saying it now are disgracing the honour of those who were actually targeted by the J. Edgar Hoover and the FBI, or by Hollywood execs, or by the closeted KKK members who were policemen and judges by day who secreted black men away and tortured and murdered them in the name of their false god.

Someone actually said, “Leave that old man (Cos) alone!” Would you have said that same line to Emmitt Till’s surviving family after they found the men who lynched him, or a Holocaust survivor whose previous jailor lives up the street from him, or a victim of the Khmer Rouge while Pol Pot was still alive? If not, then shut the hell up.

The best is the conspiracy theory: The government is trying to cut down every single successful black man.

Yes. “They” are trying to cut down everyone successful and brown. Women are getting themselves assaulted by these powerful men who have a better opportunity to abuse said power than the women do to escape them. This was the plan all along. First Special Agent Rihanna jumped in front of Chris Brown's fist, and then Agent Janay Rice went unconscious in an elevator just as Ray Rice was very swiftly putting a brooch on her lapel. Agent Under Age GAVE R. Kelly a gallon of water and then dodged in front of him when he was innocently trying to release it. Then Agent [ANONYMOUS] had the nerve to get herself roofied in front of Cee-Lo and wake up naked next to him. Now they are going after the Cos. The FBI must hate all of a sudden hate Pudding Pops and Fat Albert. THAT must be it.

The only “They” who is trying to cut down these “men” are themselves and their own actions. Cee-Lo Green pled no contest to drugging a woman, and then went on a Twitter based mansplain campaign to give his definition of what consent and rape are, both of which show that he definitely drugged and raped someone. Ray Rice was CAUGHT ON CAMERA knocking out his wife, just as R. Kelly was on camera urinating on a minor. And Chris Brown...Well, fuck Chris Brown, so many ways until Sunday. In Blizzuricane Cos™, Hannibel Buress brought it up in his stand up routine, but these allegations were out the open for years. The public just glossed over them or wilfully ignored them for 8 years. The real conspiracy in this case is that the general public ignored this for so long in order to maintain Cosby's idol image, and that it took a man, not the victims, for this to finally be treated seriously. 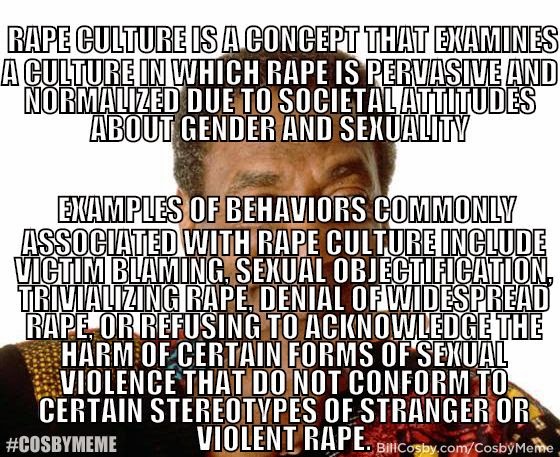 People think these women came forward because they want money. Bullshit. The women who came forward, I surmise, because of there is strength in numbers. Women, just like brown kids and intersex individuals, are routinely blamed for the crimes committed against them. They are automatically accused of trying to "ruin" a man, or that they're only after money, or that they should not have worn something different. This would make it very difficult to muster courage to speak up, not to mention all the dirt people will bring up from their pasts. If a woman so much as kissed a boy on the cheek in kindergarten, she's labeled a whore. Who the hell would willingly put themselves through this type of verbal and social abuse alone? When more women come forward, it must be the affect of knowing that they are not alone. Again, just my theory.

Here’s a valid conspiracy theory: the American public is a giant herd of starfuckers. We see someone famous, and we turn them into messiahs and prophets. I’m surprised there isn’t a Church Of Cos already. We do it ALL THE TIME, whether black or white. Everyone famous is a deity in someone’s eyes, and as soon as we learn that they are nothing but humans with drug problems and gambling habits and porn stashes and aggressive power issues, we treat the people who bring us this information like the way the Church treated Copernicus or Joan of Arc. They’ll either be berated to the point that they recant the truth, or they’ll be socially silenced. Lance Armstrong actually got people FIRED for telling the truth about his indiscretions. Try saying in public Beyonce is just “okay”. You will be convicted of heresy and burned at the stake. The second a sex charge comes out against an athlete, no one can believe that their knight in shining Under Armour would EVER touch a woman that is not his wife. Name a celebrity, and there is a star being fucked by the public.

So, anyway, I still REALLY like The Brown Hornet. I just can’t stand the man who brought him about. I’m done starfucking my favourite celebrities. You should stop starfucking yours. They don’t give a damn about that goat you’re about to slaughter for them.

In Bassett’s name, we pray…


PS- If you’re on Cosby’s side for this, then you’re on Glenn Beck’s side as well. Do you really want that? Glenn. Beck.
Posted by Chris Thompson at 20:23