Halloween is right around the corner. I hope you have as much fun as I always have. I’ve been Samuel L. Jackson for the last 4 years, and it has been fulfilling. Unfortunately, I’m down his roles where he’s a either crackhead or slave. It’s like when people have a Mad Men party. I can either be the butler or the lawn jockey, so a break in tradition may have to happen this year. Anyway, as usual, I digress…

I just want to ask something of all my white friends: If you decide to dress as Michael Jackson, PLEASE be post “Bad” Michael Jackson, because if I see anyone in brown/blackface this year, it won’t be a matter of IF I eat your soul; it will be a matter of WHEN. There have already been a few parties and pictures coming out on social networks where white people were in black- or brown- face. Famous people are doing it as well. One person attempted to defend her party:

In no way was this party intended to hurt anyones feelings or upset anyone at all. In fact as you can tell from the photos I dressed up as cleopatra, whilst MAJORITY of my guests came as animals, that can be found in africa or wore traditional african clothes or even dressed up as famous people who come from africa. If anything this was to celebrate the amazing country and people.

OK, beside the fact that Africa is a COUNTRY, it’s just not funny. And you lost all rights to try to make that funny when your ancestors ransacked Africa and used some of her residents as free labour to help build their home nations and colonies into superpowers. By the way, if your excuse is that you’re being “topical” and trying to be as authentic as possible, I’m not buying that. I’ll promise not to dress up as OJ Simpson if you promise not to dress as George Zimmerman and Dead Trayvon Martin. Asiana Airlines pilots should be off limits as well. This leads me to my next request... 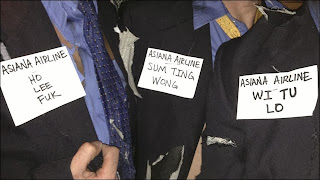 There are still quite a few “ethnic” costumes that you probably shouldn’t where. The Mexican Bandito, The “sexy” geisha, the Chinese delivery man complete with buck teeth, the myriad of Native American costumes...just...no...None of these are funny, and even if you really wanted to be any of these, ditching the brown, red, or yellow face makeup, tape near your eyes, and bottles of hooch would make it a LOT less offensive. I’ll tell you what: If you choose not to do these, then I won’t assist my brown, red, and yellow friends force feed you quarts of Magnesium Citrate as though you were a foie gras goose. Don’t worry; it’s not poison. You’ll just wish it was after about 20 minutes.

I dressed up as plenty of white people in the past, from Captain America to Alex from “A Clockwork Orange”, and I never used “whiteface”, and plenty of people got it. If fact, one person identified me as Isaiah Bradley when I was dressed as Captain America, and we high-fived because we each got an obscure reference...and both realised we were likely not getting laid that night. If you REALLY want to be Blade, ditch the make-up. The worst thing that will happen is people will mistake you for a Ginsu knife salesman with an overbite. Ask yourself this: Does your costume require brown or black makeup or tape on your eyes? Yes? Well, are you going as a tree or a silhouette from an old iPod advert respectively? No? LEAVE IT HOME!...there is no feasible reason for you to tape back your eyes, unless you want to get punch in the face by an Asian person. The bottom line is that you have a myriad of people you can portray. You can do it and be edgy without being a f***ing dick about it. Leave the face paint and tape at home, or we can’t be friends anymore. Why do you even have face makeup anyway?