I attended the rally for justice for Alton Sterling and Philando Castile, hosted by the organization Building Leadership and Community Knowledge (BLACK) on 8th July 2016. What happened that day is well documented in the news and was addressed by both of you in a press conference, but I am very concerned with the accounts addressed in said conference. 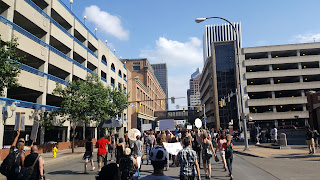 For the most part, the rally was a peaceful event. I saw members of BLACK speaking directly with police officers, assumedly to inform them in which direction rally-goers would march in the streets, so that the police could properly redirect traffic and keep both attendants of the rally and bystanders and drivers safe. Though we were marching to mourn the deaths of 7 individuals (Alton Sterling, Philando Castile, and the 5 officers in Dallas, Brent Thompson, Zack Zamarripa, Michael Krol, Michael Smith, and Lorne Ahrens), The mood was energized but calm. I was slightly concerned, though, that police in riot gear were deployed to the corner of Woodbury and Chestnut, but we diverted back to Liberty Pole anyway. After a short break, we marched down East Avenue, as our intention was to hold a vigil for the individuals who needlessly lost their lives. It was not until we ended our march at East Avenue and Alexander Street that two stories have emerged, which is my major concern.
Another rally attendee and I left the area to pick up her car and transport the remaining food, water and supplies from Liberty Pole to East and Alexander. Though someone had already transported the supplies, we were gone for only 20 minutes, and in that time, the streets were blocked off, and there was minor chaos at the corner. Police in riot gear spanned the entire length of East Avenue, slowly marching down the street, randomly picking up people to arrest as they marched closer and closer to Prince Street. Bar patrons were in the streets yelling more and more expletives at attendees and police alike, primarily taunting the attendees. By the end of the night, Police officers were also arresting bystanders who had nothing to do with the rally.
At your press conference on Saturday 9th July, Chief Ciminelli said that there were no injuries to civilians or officers. I know for a fact that this is not true, as I watched as one officer lunged and tackled a sitting rally attendee and punch him in the face numerous times until bloody. Attendees had to pull him away from the officer, and two or three officers had to pull away the officer from his grip on the attendee. Minutes later, I saw a pile of officers on another attendee. One officer was intent on attempting to arrest one of my friends, who was not part of the rally and walking her bicycle and trying to get home from work, not knowing what on earth was going on. The entire time I was at the event, I saw no rocks thrown at police officers. I will not question what I did not see, but Alexander and East Avenue is a fairly busy and well-kept street that I frequent, and it is uncertain from whence anyone would find a rock to throw at anything. In the press conference, you said that some attendees intended to be arrested. That is not true. There were a group of people who said that they would be willing to go to jail if need be, but no one in the rally had any interest in breaking the law or causing trouble with the local community. This mischaracterization is what breeds acrimony in the community.

I saw bar attendees yelling and screaming at attendees, spitting racial epithets at both the black and white attendees, throwing things at them, antagonizing them, but I did not see any officers stop them from doing so. I saw two bar customer bystanders who were just seeing what was happening outside be grabbed by officers. They may not have heard the officers’ orders to leave the scene or stay inside, as it was a slightly noisy scene.


Just sandwiched the last of them. Told them to move back, but they're behind them too #Rochester
A video posted by Chris Thompson (@chronsofnon) on Jul 8, 2016 at 8:01pm PDT

My primary concern is why were some bar patron bystanders were arrested and others were not? The ones yelling expletives and taunting the rally attendees seemed not to be quieted or told to leave. One man was yelling that the rally attendees were fighting a losing battle, and a bar patron across the street simply responded, “Shut up”, and the second patron and his friend were the ones grabbed and placed in handcuffs. While this was happening, another bar patron boldly said, “Arrest those animals”, but he was not arrested. The difference between the bystanders arrested is literally black and white; white bystanders could say anything they wanted, but black bystanders were rounded up. The proof is in the fact that two black reporters were arrested while covering the story. Though you apologized publicly for their apprehension, what about the bar patrons, and why weren’t any patrons on the north side of East Avenue policed for their behavior, which would be seen by anyone as “disorderly conduct”? 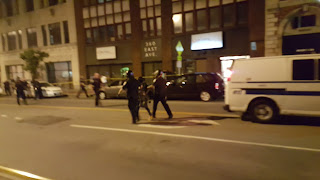 I understand the police officers’ concern for their own safety at this event given the shootings at the Dallas rally, so it is understandable that some or all of your force were on edge and extra vigilant. However, I do not see arresting people who had nothing to do with the rally, who went to East and Alexander to have a good time and may not have even known about the rally, is an exercise of caution or vigilance. I also do not understand why the people instigating negative discourse and acrimony were not arrested along with the rally attendees. I was called an animal to my face, and fortunately, I had the wherewithal to walk away, albeit blindly livid, but those attendees who talked back to those drunken people who were essentially trolling were the ones being more policed, not the publicly inebriated people mocking both your police force and the rally attendees.
When I read an NBC News article about the rally and responded to them regarding the gross inaccuracies of their story, someone from NBC contacted me within 24 hours to hear me out. Though I do not expect a mayor and police chief of a major city to personally respond to me, I do hope my concerns and my questions about what happened do not fall on deaf ears. I hope someone reads this and engages with me in a professional manner. I respect both the Mayor’s and Police offices, and envy your capacity to do your jobs the best you can without bias, but the manner in which I saw many (not all) officers behave are why I, a 38-year old engineer, am sometimes scared for my life when even when I know I’ve done nothing wrong when I see a police officer, and why the rally was held in the first place.
Best Regards,
[Chronicler of Nonsense]