Cloudy with a Chance of Negroes 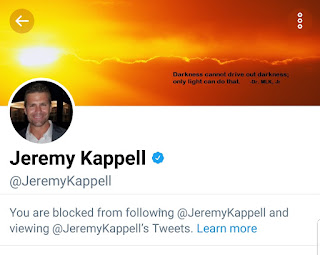 Jeremy Kappell finally blocked me. I’ve been sending him Martin Luther King speeches that flesh out the shallow Martin Luther King memes he’s been posting since he was fired for (accidentally) calling him a “coon” on live television. I’ve also been sending him essays from James Baldwin and Angela Davis. I sent him links to books like “White Fragility: Why It’s So Hard for White People to Talk About Racism”. I sent him a few articles that explicitly articulated how lazy and boring it is to continue to depict Martin Luther King as some sort of saintly figure that everyone loved, when the complete opposite was the case. I highly doubt he paid attention to any of that information.

It seems the breaking straw was when I responded to him (finally) meeting with a prominent black person in the community, and his takeaway was that she was "over-sensitive" to racism and and blind to "REAL" racism. Because what the world needs is another oblivious white man to tell black folks how and when to react to HIS definition of racism.

His actions spoke to that. He did everything that every white person does when caught doing something egregiously racist, accident or not. So here is a list of things you should NOT do, should you find yourself in a pickle because you transposed the first letters of “Neil Rigger”: 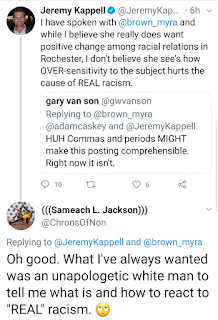