Picketing the Picketers or Craig and Chris's Excellent Adventure. 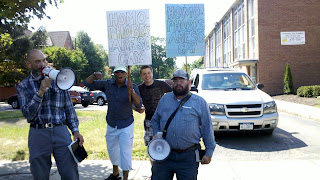 Last weekend (16-17 Aug) was the Rochester Pride Parade/Festival/Picnic. As much as I’m pro-LGBT rights and equality, I’ve never been to a pride ANYTHING, save for a demonstration here and there, but no festivals. I just had to go. I figured it would be fun, and fun it was…

I learned from prior Parade participants that there is always a group of anti-gay, ultra-con, über-“Christian” zealots who picket and heckle the parade. So I decided that I would picket them. I made some picket signs, coaxed my awesome neighbours out, and we went hunting for hecklers. 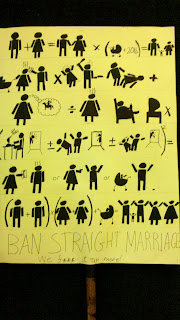 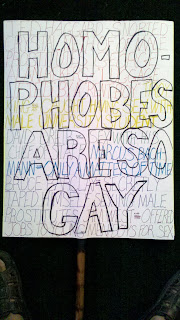 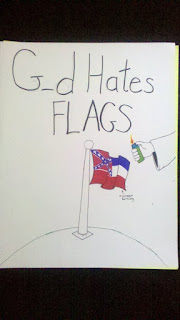 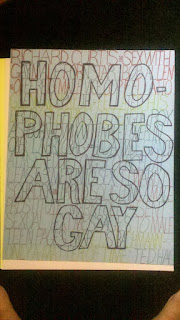 It took less than one block before we found the first of them: two men, one tall and thin and the other short and portly. Let’s just call them Bert and Ernie, because I know that after their campaign, they probably went home to the same house and made love using a rubber ducky and a sex toy. They looked to be in uniform, each having a drab flannel/plaid shirt and hiked-up khakis, and each clutching a leather-bound bible in one hand and a loudspeaker in the other as if they were in uniform, pointed out each parade procession and warned of the group’s impending doom, to include a Presbyterian church, some transvestites who were conservatively dressed, and a little girl.

I looked at my neighbour, and just said, “Dude…”, and he knew exactly what to do. We stood directly behind them and held up our anti-anti-gay posters, and as they attempted to upset the parade procession with their fire-and-brimstone hate speech, we riled the crowd and the paraders to cheer louder to drown them out. Most poignant part of this experience was that a woman with a sign that said “Hate Kills” on one side and a memoriam for her murdered son on the other side passed by and showed them her sign, and Ernie said something to the effect of, “I don’t know what ‘Hate Kills’ means, but I do know that G-d kills, and you are sinning by being a part of this.” I had to leave them after that, for fear I’d be compelled to punch them in the back of the neck and shove their loudspeakers down their throats.

The next group was pretty big. They were handing out fliers and everything. They were, “passive-aggressive bigots”. They didn’t say anything, but they did have huge banners that had bible verses about the consequences of not taking Jesus into your heart. One of them noticed my sign and decided to talk to me. The convseration went like this:

BIGOT (extends his hand for a “friendly” handshake): Hey man, I just want to let you know that I’m not afraid of you.

ME: I know you’re not afraid of me, and I didn’t say you specifically are afraid of anyone.

BIGOT: Well you’re standing behind me with these signs that say, “Homophobes are gay”, and I’m right here.

ME: Well you must have a guilty conscience, because your name isn’t on the signs. If you look, it’s a list of all the anti-gay activists and politicians who got caught doing gay things. Is your name on here?

BIGOT: Well I see what you’re insinuating. You’re saying that we hate gays. What you’re doing is pushing your views on me.

Bigot McGhee then tried to entrap me into a circular logic debate to get me to say that I’m a dirty, sinning homosexual, but without him saying it, so I’d be admitting my own “fault”. The problem is that (1) I’m not a homosexual at all, and (2) I left churches like that behind years ago, but I recognise the ruse: get the “sinner” to admit his/her “sin”, then when he/she doesn’t want to pray or go to your church, you are going to hell, and you feel better about yourself, because you “tried”.

What amuses me about this is that these people claim to be doing a good deed, but they are simply wasting a perfectly good day where they could be enjoying time with their families, helping the homeless/poor, cleaning up the city, or just enjoy the sunny weather, all of which are things that their bible says they should do. Contrary to popular believe, there is no requirement that says, “Go out and deem a bunch of people sinners, then piss in their Cheerios by trying to ruin their fun time.”

I think that my mission will be to go out and undermine these overly-aggressive and passive-aggressive bigots every single year. That was the most fun I’ve had in a while. :-D