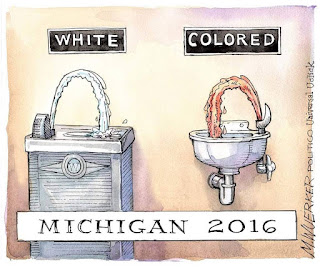 I really cannot decide which is more infuriating: that no one has been charged with criminal negligence in the #FlintWaterCrisis, or that the effects of lead poisoning are the same negative stereotypes foisted on poor and black people? Lead poisoning affects a person’s developmental skills, especially in children. People poisoned by lead are less likely to be able to handle complex problem solving necessary in school. They do not handle emotions as well. They do not mature. They are more likely to lash out in violence, so their penchant for criminality is higher. There are over 100,000 residents in Flint, 9,000 of them are children. It is a majority black, poor, and working class. In 10 years, when those children are getting lower test scores in school and being relegated to special ed classes by administrators who just don’t want to deal with their behavior issues, I’m-not-racist-but racists and I’m-better-than-you racists, and basically every person on a couch at Fox News, will point to Flint to justify their prejudices and veiled bigoted views, not acknowledging that half a decade earlier the entire city was poisoned.

This all could have been avoided when researchers warned in 2011 a Snyder-appointed financial manager that changing the water supply to Flint River water would require a $100/day water treatment to prevent corrosion and lead poisoning. But his assignment was to cut the budget “at any cost”, so the only colored people he cared about were the little green dead presidents. In 2014, Flint River water was used without anti-corrosion agents. Even when the water was coming out smelly and brown, Flint officials ignored the residents and claimed it was fine. Even when Detroit offered to reconnect to their system, Flint officials declined and continued to charge their residents for contaminated water. Even when the EPA, VA Tech, and a local pediatrician said that the water was too highly lead-poisoned to consume, officials all the way up to the governor’s office dismissed the reports. that is four times that officials actively ignored the welfare of Flint citizens in order to save a little bit of money.

This is why there’s a #BlackLivesMatter movement. It was never about saying only black people matter, as many would have you think. It is a reminder that black lives are here too, and dismissing their concerns lead to things like this. You wonder why people are in the streets blocking traffic holding #BlackLivesMatter signs. Cases like Flint are why. Whenever someone recalls atrocities like the Tuskegee Experiment and redlining neighborhoods, people say, “That was another time, and it’s over, so get over it!” Thanks to hyper-edited history books, though, These things are no longer learned in school, though, and as we can see in Flint, history WILL repeat itself. Slavery is being edited out of textbooks now. Black history matters, because it is American history. Our ancestors came here and built this country just as much as white people’s ancestors did, albeit ours was primarily an involuntary migration. Our story needs to be heard, as it is still everyone’s story. I seldom hear people who bring up the Holocaust or  9/11 being told to “get over it”. We discuss these topics openly and acknowledge their horror. The second someone talks about their Freedom Rider grandparents, though, they are admonished for bringing up dark times. Those dark times are OUR times. We all grew from something, including the bad parts. Ignoring the badness doesn’t make you better. It makes you repeat it again and again. Stop trying to diminish something just because it makes you feel icky. There is no excuse for another Tuskegee or Flint to happen in the 21st Century.

Flint is one of many cities affected drastically by the auto industry collapse. While all this water crisis happening, Grand Rapids and Ann Arbor, cities of similar class with proportionally inverse population of people with melanin, are ranked high in economic growth and investment after their prime industry was gutted. Flint will continue to be poor, because they are still paying for poisoned water. The people of Dearborn are sending water to Flint out of the kindness of their hearts, something they should never have had to do. Dearborn, MI has a high Muslim population, you know, that group that a certain presidential candidate thinks should not be allowed in the country. He hasn’t sent any aid to Michigan, though, not that it is his job, but if he becomes president, it will be.

We should all be mad about the water crisis, not because the Flint residents are poor and black and have been ignored, but because the people of Flint are residents of Michigan, which is in the United States, and their state actively slowly killed citizens and residents to save money. When a state can poison its citizens and ignore their concerns for the sake of saving a little bit of money and not go to jail for it, yet armed militants can walk into a federal building and hold it hostage, vandalizing people’s hard-sought research with no law enforcement intervention, there is a problem, whether you wish to acknowledge it or not. But, like the Flint water problem, continuing to ignore the social problem will just make it grow larger; don’t act surprised when it is in your face.