School’s back in session. It’s a new year for our youth to learn the tools they’ll need to pass a bunch of standardized tests that will not teach them critical thinking, because our public schools all value quantity over quality. Drive on, children. Drive on. Nothing can stop you, except for one thing…
#TeacherBae.
“What the hell is #TeacherBae?”
Watch your mouth, Clyde. I’ll fucking tell you. 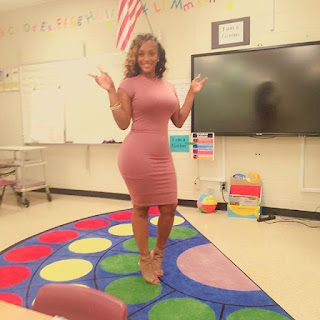 #TeacherBae is the nickname given to Patrice “Tricey” Brown. She got it because she posted a few pictures of herself in her 4th grade classroom via Instagram. The captions said things about her being enthusiastic about the school year, how she can’t wait to meet her new students, how she loves teaching. That is no controversy. It’s always good to see a teacher excited about their job. What she was doing in her classroom pictures was scandalous, though. Many couldn’t BELIEVE that she had the audacity to do what she was doing, in a school full of minors, even! She was doing the unthinkable:
She was wearing clothes.
I assume you’ve awakened from your fainting spell, so I’ll continue. Ms. Brown was in her classroom, in various outfits, standing and smiling like she owned all of the sunshine in the world. In one picture, she donned a peach colored dress that covered her knees and matching stilettos. In another, she wore a varsity jacket, baseball cap, shirt, and jeans. In another, she wore a long grey dress. People had a problem with how tight her clothes were, though. Patrice Brown is a bit…curvy.
...No. Patrice Brown is goddamn FINE. Black Venus fine. Pygmalion sculpted her fine. “Face could launch a thousand ships” fine. Black Star’s “Brown Skin Lady” fine. “Replace Nia Long’s name with hers in every 1990s hip-hop lyric” fine. She is shaped the way comic book artists draw female superheroes. Damn. Just…damn.
Now what does her beauty have to do with her ability to teach? Not a damn thing. But if you google #TeacherBae, you’d think everything. What about the children??? According to many, her wardrobe is “inappropriate”. She is going to be a distraction for the male students. No one should be wearing heels like that in front of children! Is she teaching or going to the club? So scandalous! How dare she…wear clothes.
Concern trolls were concerned. They wondered whether her choice of dress in her pictures would detriment her career. Would she get fired for wearing such “racy” clothing on social media? Can she actually teach in such form-fitting clothes? What about the children???
Now it has come out that Ms. Brown isn’t actually a “teacher”, but a “paraprofessional”. That just means she’s a teacher’s aide. Essentially, yes, she’s a teacher, but classes are either too large for one person to handle, or the state gouged the meat of the education budget, so they can’t give her benefits or tenure. Regardless, she has “been advised” by the Atlanta Public School System about her manner of dress in the classroom, so don’t worry, everyone. She’ll be free from your perverted prepubescent children’s male gaze!
Patrice Brown is not the subject of controversy because her wardrobe is “inappropriate”. Dress/skirt down to the knees is the standard “professional” attire. Even the jeans and t-shirt were covering up her…”distractions”. Patrice Brown is being socially punished for having a body deemed beautiful and attractive. Women’s bodies, especially black women’s bodies, have been a false metric with which people correlate their intelligence and libido for years. People think blonde means dumb, large breasts and butts mean promiscuous, skinny means bitch. Black women specifically have been hyper-sexualized in this country, and in Africa, since colonization. In Africa, European “pilgrims” would take African women as “wives for the moment” while they built castles and settlements to further their resource extracting endeavors. They would leave them once they were called home. Below those castles, the captured women who would eventually be shipped to the Western Hemisphere would be forcibly “partnered” for the night with drunken soldiers and captors. In the Americas, slave owners regularly would cavort with their female slaves. These were not loving relationships. This was systematic rape. The myriad of hues of black people in America is not because of recessive genes from Angola or Côte d'Ivoire. This oversexualizing continued, obviously up to today.

I bet y'all wouldn't have nothing to say if she was built like this #teacherbae pic.twitter.com/eNQibGwdK8
— Wave Bari (@stackztootrill) September 12, 2016

Ms. Brown has a thin waist and large breasts and butt, so by the social metric, she is a bitchy and promiscuous. Forget what her education level is. Forget that she has been working for the Atlanta school system for years. Her body type, which is primarily gene-driven, gave people the impetus to judge her acumen. People will say that she should wear clothes “her actual size”, but she IS. Clothes for women objectify women as much as our eyes do. It is the way they are designed. If she wore a burlap sack, she would be accused of being prudish and cold, because women, especially black women, cannot win when it comes to looking “professional”. “Look Professional”, itself, is a term that is code for, “Look as much like a straight white man as possible”. It has nothing to with a person’s abilities or safety measures for the job. Usually, this is why black hair in its natural state, bushy, curly and beautiful, is considered “not professional”. This is why there are so many hair care products that LITERALLY BURN black hair and scalps straight. Body types apply as well. If Patrice Brown wore a pantsuit that was tight (because that is likely all she’d be able to find), she would still not be considered “professional looking”.
The call, “what about the children”, is the hollowest part of this body-shaming argument. People say that the boys will not be able to concentrate, or that they are little perverts who won’t control their behavior. There’s a crazy idea called TEACH YOUR STUPID KIDS TO BEHAVE. If you think that your boy will lose his mind over seeing his teacher in a tight dress, then your shitty parenting, not her dress, is the problem. Claiming that a boy won’t be able to concentrate in front of an attractive woman is teaching him that he is allowed to objectify women early on. Those kids are 9 and 10. They are not worried about sexualizing anyone at that age. Foisting your own thoughts on a child is the real perversion. Teaching kids at this age that women are people and not property will allay any worry of them being “distracted”. Furthermore, if men are supposedly the superior, more in control gender, then how is it that simply viewing a person would unravel our composure? 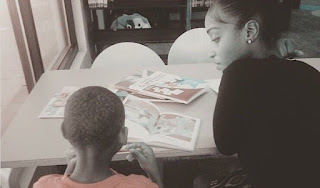 Let Patrice Brown teach, or para-teach, in peace. The rest of the world talking shit on her, both black and white, need to take several seats. The only people distracting her from doing her job are the ones talking shit about her.
Posted by Chris Thompson at 17:52