Wrath of the Nobles/Building of Roads

It has been many moons since Squire Bugiganga has wrote of the tales of his daily labours. This is due in part to the work load he has been given, due to the decisions of the Nobles. Since I last wrote of our efforts, much has transpired:

The previously mentioned flying monkeys have a catch (besides the poop-flinging): One can only use the monkeys unlicensed for 30 days. After that, they flee to their cages, will not work unless we purchase keys that unlock the cages. Squire Bugiganga reminded his Noble, ShaqsDad the Destroyer (his name will be explained later), that he needs this in order for the monkeys to continue their journeys. He reminded him early April, and he was told, “Oh, that’s no problem. I’ll get them”. He then reminded him mid-May, and ShaqsDad replied, “Oh, that’s no problem. I’ll get them.” Finally, at the end of the month, the monkeys stopped working, and fire and brimstone were poured upon the squires by Inadequous the Compensator (his name, too, will be explained). When Inadequous demanded to know why the monkeys stopped flying, we explained why, and ShaqsDad finally said something different: “Oh that’s not a BIG problem. I’ll get them.” Note, he said “BIG” this time. We finally got the keys in June.

The kingdom design, though painstakingly intricate, is going well. Large castles, many small manors, and huts are being constructed. Roads must be built from every entrance of every building so that messengers of information can travel in specific directions to their destinations. The roads must be labeled, as do the entrances and exits to all the roads. The Squires thought they had achieved their goal: roads to the small huts travel to the larger manors, then to the larger castles, ultimately to the main bastion. The Kingdom’s citizens will dispatch their goods and supplies by using carriages pulled by Unicorns loaded with Windows XP, Service Pack 5*. A general diagram is attached.

Unfortunately, one Squire, Vlad the Inquisitor, Master of Inconsequential Inquiries, pointed out that in order for his army of faeries to travel, they need their own specific side paths, independent of the Unicorns’ roads. Squire Bugiganga made the 25 paths and labeled them. He then went on to work on other important things, until:

VLAD THE INQUISITOR: Squire Bugiganga, why are all these paths labeled differently?

SQUIRE BUGIGANGA: Because to label all 25 paths the exact same thing may confuse your faeries, and it would cause great confusion throughout the kingdom.

VLAD: But I trained all my faeries exactly the same. They all have the same name: Simon. I do not understand why you would make every road a different name.

BUGIGANGA: [Sighs]…OK, we both live in the hamlet of Roc. If we live at , but you also live at a across town, then we risk getting supplies from that unicorns meant for the wrong person.

VLAD: But I still do not understand…

BUGIGANGA: When you test flew your faeries, did they get to their desired destinations?

After the altercation with Vlad, something more horrible happened. All was well in the Kingdom. Birds were chirping, bunnies were frolicking, woodland creatures were skipping through the town, for all was nearly finished. Then, ShaqsDad the Destroyer arrived.

It started with a simple issue: Inadequous the Compensator could not get his unicorn to travel from one hamlet to another. Inadequous can be a belligerent person. The squires believe his aggressive attitude has partly to do with the fact that he tries to hide his incompetence, and partly to do with his attempts to compensate for…something…He owns a ridiculously oversized Sports Utility Chariot and a bright red sports carriage…Anyway, the squires knew that he simply did not use the right path to get to the hamlet, but before they could solve the problem easily, ShaqsDad arrived.

Ye, like Shaquille O’Neal’s father before him, ShaqsDad gives no input, assists in no way to the building of the Kingdom, but right when our work is successful and ready to go, he comes in and ****s everything up. He had a TANTRUM. “Why are these roads labeled as such?!?! Why can I not travel to this town?!?!?! I don’t understand this, so it is WRONG!!!!! BLAAAARRRRGH!!!!!!”

The Kingdom, once beautiful and spectacular, had to be redesigned according to ShaqsDad the Destroyer. His diagram is shown below. When the squires asked about the inevitable confusion of the delivery of supplies, like Shaquille O’Neal’s father, he said he had to get a pack of cigarettes and never returned. The squires still have to use his plan, though. The Squires have less than a week to re-change a ½ year of work. 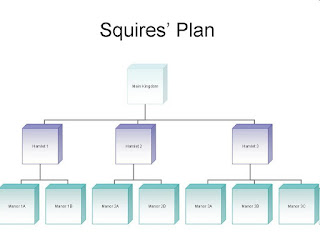 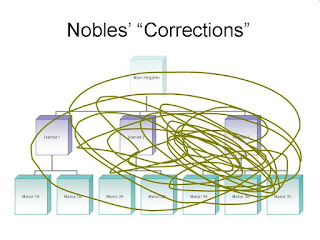